How could a decade-long joint work evolve from former dislike? How did the founders of Use Unused dare to go for the international arena just after graduation? Why is it good if creativity is framed by some business approach? At the Budapest LAB and MOME+ first joint series of events, these issues, among many others, were discussed by the founders of a Hungarian fashion brand, who unexpectedly closed down their business during the summer after achieving international success.

Numerous fresh graduates dream about having their own enterprise and brand, but they find strategic planning and assessing their opportunities and potentials difficult, and also the lack of necessary economic and marketing knowledge gives them a hard time. The aim of COLLAB, powered by Budapest LAB – MOME+, is to seek and offer answers to these complex situations by involving a wide range of expertise. By creating a portal for asking and answering questions, COLLAB forum provides a joint platform for designers and members of other professional fields for sharing their general ideas, success stories and those failures that were overcome. Recurring topics include a diverse range of different aspects focusing on setting up a business and on how to stay in business.

In the first evening of the event, our guests were Attila Godena-Juhász and András Tóth, the founders of Use Unused. The brand story received particular attention and was a resounding international success up until this summer, when the termination of the brand was announced. During COLLAB #1 a lot was revealed not only about the last big news but also about the road towards success. The story offers plenty of lessons to learn even to those entrepreneurs who are not involved in the fashion industry. These themes were the focus of the discussion moderated by Dr. László Radácsi, Director of Budapest LAB – Entrepreneurship Centre. 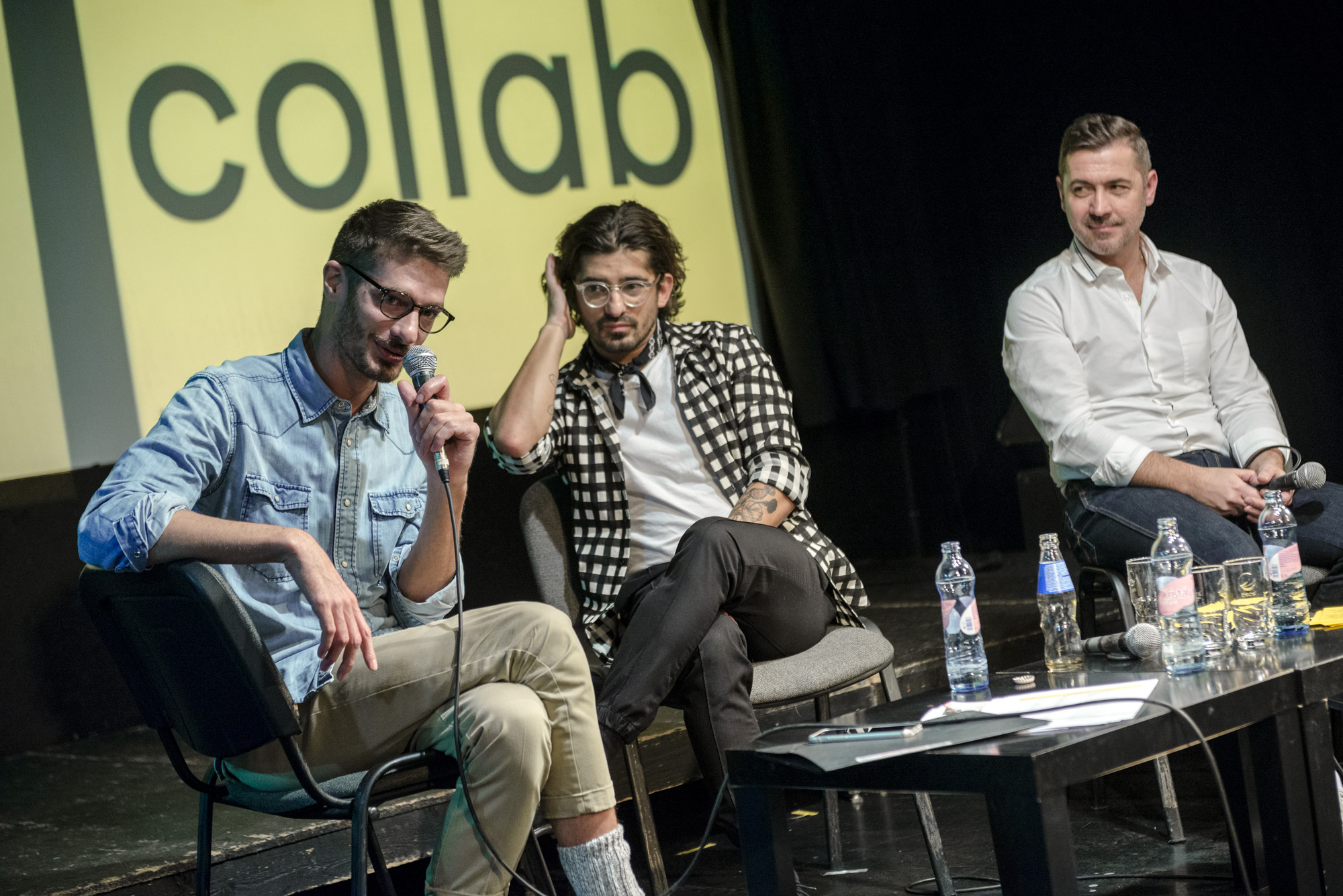 Collaboration out of necessity

Having worked together for thirteen years, the collaborating pair envisages their future professional career together even after terminating Use. However, when they met at the Hungarian College of Fine Arts they felt antipathy towards each other. This situation changed when they had no other choice but to work together on a learning task and although earlier they would not even sit down together to have a coffee, by doing the task, it quickly turned out that they see the world in a similar way. They created their collection as a diploma work with Eszter Füzes, the third founder of Use, who later left the company, causing quite a stir in the currently reviving Hungarian national fashion scene.

“While, to that date, graduates typically took photos of their girlfriends at home wearing the collection they created, we employed a professional stylist and a photographer – that is, Márton Perlaki, who was also a young graduate at the time – and we arranged a real fashion show instead of imitating a catwalk by pushing benches together at the university”, András Tóth explains. To be able to do so, the young designers needed to look for sponsors. Their collection brought them tremendous success that altered their previous plans: formerly they intended to gain experience at large fashion firms in Paris but they decided to stay and go on with their work in Hungary. As they were not prepared or taught to build their business during their studies, they were not aware of deliberate and conscious ways to follow when setting up their business.

Our ignorance pushed us forward, the designers admitted, as they did not even have a business plan in the first years of the operation of their business. In fact, the company itself was created in a rush: they did not consider the legal framework until receiving the invitation to introduce themselves in Paris based on their diploma work. As the foreign partner started to set up conditions and to define requirements, it became obvious that they needed a company and they needed it at once.

Drifting with the stream of events surrounding them, they had to learn everything on the way. For example, if their collections were invited to feature at a show abroad, they had to send clothes hangers too, they also had to learn what papers they needed for transportation, how to calculate VAT, etc. In the first years, they were struggling with invoices and identical invoice serial numbers. A decade later, however, András Tóth kept his hands on the business as CEO. The founders were of equal rank but with different responsibilities: everybody got tasks that suited most to their strengths, and this division of work contributed to effective collaboration.

András Tóth, who had no former education in business studies, had to undertake the position of the CEO because, according to the founders’ experience, there is a shortage of professionals in Hungary who are good at the fashion industry and are also willing to support such businesses. It is almost a mission impossible to find expert marketing or accountant professionals who have special expertise in the field of fashion and the ones on the job market are hunted by several companies. The lack of professionals causes serious problems in the field of production, too. This is evidenced by the fact that after terminating Use, their workers and dressmakers received dozens of job offers from other companies. There is great need for highly-skilled professionals – all the more because, as András Tóth puts it, in recent years designers increasingly see themselves as artists, therefore the skilled work associated with fashion design falls to others. On the other hand, both András Tóth and Attila Godena-Juhász like these jobs too, so during the time their company was growing, they struggled with having to spend most of their time at the office instead of creating and realising their ideas in the workshop.

Business development also strongly influenced design work, András Tóth and Attila Godena-Juhász explain. In the beginning, their collections were created by following an organic structure: one idea brought and enriched another, and they often invested in expensive materials in order to carry out and realise their best dreams and visions. On the other hand, recently they have started to work and plan using Excel tables. The planned price was the starting point and that served for the calculation of associated costs. This also meant that purchasing materials abroad were done quickly, actually within a few days, using precise and accurate lists because they had known what they wanted and at what price. This way of planning, i.e. planning adjusted to business needs, was not experienced by the designers as a hindrance, they rather saw this as a new and exciting challenge.

Through its management fund awarded in the scope of the Jeremie Programme in 2013, Venturio Fund Management Co. joined Use Unused with a sum of HUF 300 million.

Although it may seem to be a great sum for a private person, this much money is not enough for staying alive in the international fashion industry. The founders decided to terminate the brand in spite of its international expansion, dynamically growing sales figures and positive customer feedback. You can find more information about the causes of termination and the background of the business here. 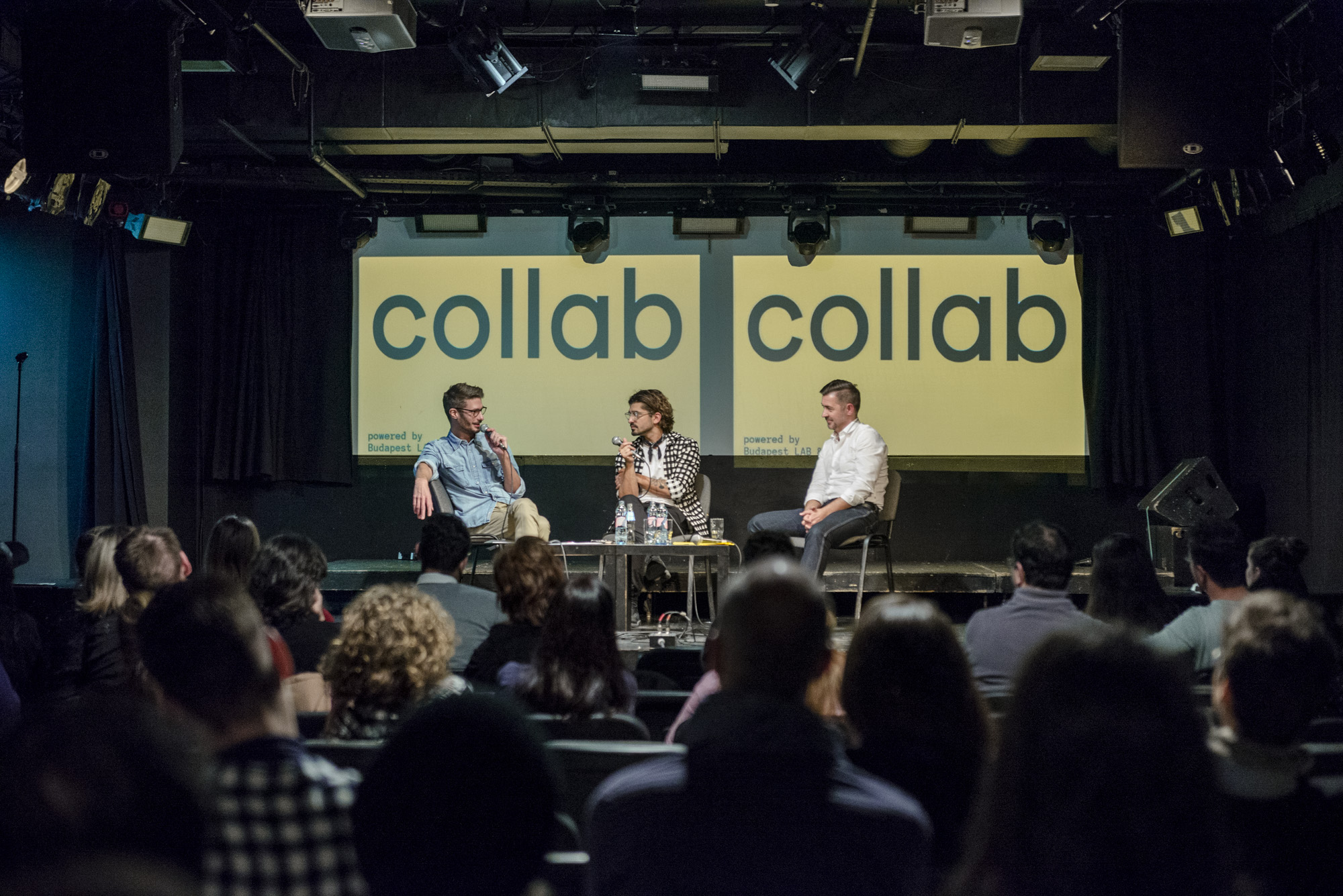 Although Use is an undeniable success story in many aspects, the owners opted for terminating the brand in the summer of 2017. Attila Godena-Juhász and András Tóth emphasised that there had never been any problems with their products, sales were growing from year to year, yet the company was producing a loss. (At the moment, none of the Hungarian fashion brands present at the international arena is making a profit, their development and operation are financed by investors and not from sales.)

The designers justified their decision with the altered market conditions, which Attila Godena-Juhász compared to a fourth degree equation. Use defined itself in the so-called contemporary segment (between cheap fast fashion and international luxury brands), the company had their good quality, non-single season products manufactured in Europe, in Hungary, and sold its products worldwide through resellers in a wholesaling structure. The operation of the company was financed with a capital that counts little in the fashion industry. Experience has shown that at least one of the above four pillars should be done differently in order to have at least a chance to reach significant business success. Even if we stick to the contemporary segment, some brands may have their products manufactured at locations where their raw material is more readily available, for example typically China. Also, there is significant potential in developing online sales. The hardest thing is investment: according to András Tóth and Attila Godena-Juhász only a few large fashion houses (conglomerates which unite several fashion brands) possess an appropriate amount of money that allows them to finance the enormous working capital needed in the industry.

Both Attila Godena-Juhász and András Tóth felt that by acting as managers of their growing company they had far less time to spend on those aspects of their profession that they like the most. Although Use could be restarted at any time if they decided so – the company is again owned by the founders – for the time being they are planning to work on individual projects and wish to execute foreign orders.

They work together with Chinese partners; in addition, they also cooperate as partners in A&Dris targeting local markets and take part, exclusively on the creative side (despite their business experience or exactly for this reason), in a collaboration with Americans, the details of which joint work have not been made public yet.

The issue of sustainability was mentioned in connection with their future plans. The spread of fast fashion and clothes designed to wear for a period even shorter than a single season not only makes it almost impossible to become successful for other brands like Use but it also entails a serious environmental toll.

Use has always believed in future-proof designs (it was one of the reasons why they had to close down) and the designers consider commitment to sustainability an increasingly important aspect of their work. Both of them think that responsible design will assume an important role in their upcoming projects and also believe that the current, extremely overheated fashion industry will slow down globally to a more manageable pace from the point of view of consumers, manufacturers and environment.

The ‘cake shop’ of Use

Even though they decided to terminate the brand, the Use Bag, which started its ‘autonomous’ life, might make a comeback. The Bag was launched as a marginal product but it performed extremely well in online sales becoming not only a trade but also a financial success. In Woody Allen’s Small Time Crooks, the main characters start a cake shop as a disguise to rob the bank next door through a tunnel from their shop. In the end they become millionaires from the cake shop. Use Bag became our ‘cake shop’, András Tóth explained.